skip to main | skip to sidebar

From Downtown to The Strip.. 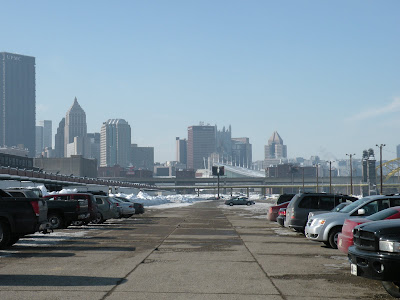 The Strip District is a one-half square mile area northeast of downtown Pittsburgh. Commonly referred to as “The Strip”, it is just what the name states, a narrow strip of land in a flood plain confined by natural boundaries, The Allegheny River to the north and the extension of Grant’s Hill to the south. The Strip starts at 11th street and works it’s way down to 33rd street. At the end of the 18th century, James O’Hara purchased this area along the south bank of the Allegheny River, (which is much of the present day Strip District) as a location for his country home. However, this land was ideal for the development of industrial and commercial enterprises. Throughout the 19th century the Strip began to be the foundation of  iron mills, foundries, glass factories, and many other industries to serve the development and many of the names that have been associated with Pittsburgh. The Strip’s location and access to transportation made it ideal for industrial development. Andrew Carnegie started in the iron and steel industries with the Upper and Lower Union Mills on Smallman and 33rd streets.

In the late 19th century wholesale produce merchants were located downtown in the 600 to 900 blocks along Liberty Avenue. During this time railroad tracks ran down Liberty Avenue, this was convenient for the merchants because the trains stopped on the street and produce was unloaded directly into the warehouses. In 1906 the tracks were removed from Liberty Avenue and so the produce merchants relocated to the Strip District near the Pennsylvania Railroad yards. The produce station was relocated at 21st street near Smallman Street, and this intersection became the new hub of the wholesale produce business in Pittsburgh. Through the turn of the century up until the 1920s industrial buildings and shops were torn down and room was made for the construction of produce warehouses and offices. The 1920s was prosperous for Pittsburgh; grocery store chains developed along the Strip District and helped bring business there. 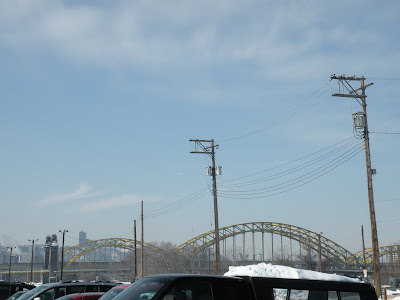 The 1930s was a rough patch for Pittsburgh, the Depression and flood that hit caused tremendous damage and losses throughout businesses. Just as people were about to pull through from the Depression World War II caused a short supply for food and other problems to the city. Railroads were soon replaced with trucks for transporting the produce. Today, the Strip District is best known for its retail produce and ethnic food stores, restaurants and coffee shops.  The Strip offers so much, a view of the river to the right and downtown in the background is just one of the treats while walking towards downtown along the Allegheny River. It’s pretty incredible once you find out the background history of the Strip and you see what it has become now. 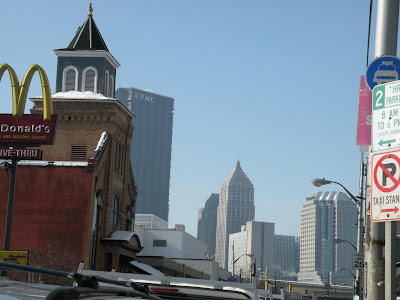 The photograph above was taken on Penn Avenue in the Strip District, it shows downtown in the background. Today downtown is known as the business district, it features offices for major corporations like PNC Bank, Bank of New York Mellon, Heinz... and many more. While downtown has chain restaurants, the Strip District has an old industrial market type atmosphere with live music and bands playing after dark. In my opinion the Strip surpasses downtown any day!

Posted by Strip District Adventures at 12:00 PM No comments:

It's a Half-Moon Kind of Day.. 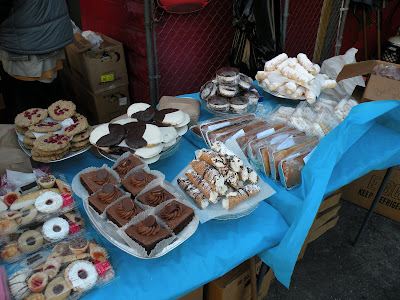 During the day, the Strip District is a bustling market district where you can find the freshest of fresh of virtually any type of food that you could imagine! Each local store offers a variety of different ethnic foods, all for a very affordable prices, not to mention you are stimulating a local economy, so why wouldn’t you shop here? Many famous Pittsburgh restaurants that are located at the Strip have been shown on nationwide television programs; Primanti Brothers Inc, and DeLuca’s are two hot spots. Along with popular restaurants and local grocery stores are street the local street vendors. You can find the yummiest deserts, pastries, brownies, or cookies located on some of the street corners. We couldn’t help but buy a half-moon cookie while browsing the local shops…I can almost taste the sugary morsel as I type this, (should have gotten more!). We chatted with some of the locals and the sellers about what their favorite treat was to buy, we came to the conclusion that no matter what you bought it was a win-win. 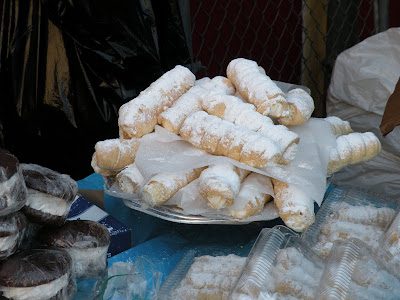 Another local vendor had a hot-dog stand set up called, “It’s A Dog Day”. We decided to pass on grabbing a dog since it was still pretty early in the morning, but locals described that stand as being very popular especially in the summer time. Looks like we will have to venture back when the weather is warm to find out! 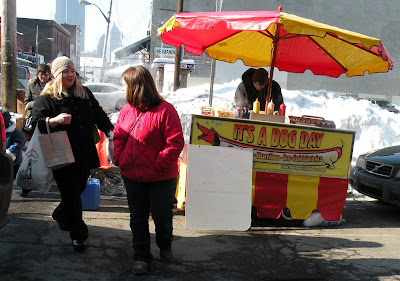 Posted by Strip District Adventures at 9:41 AM No comments:

Earmuffs for a Dollar?! 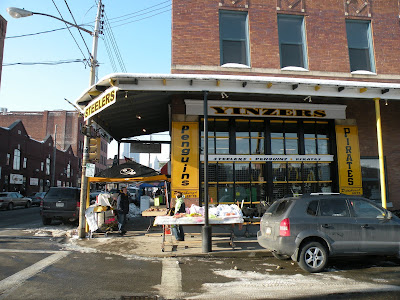 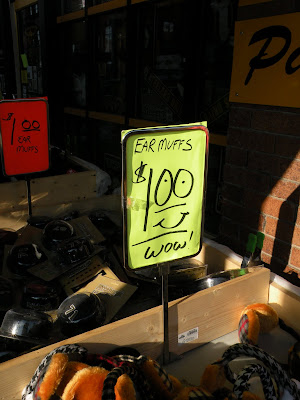 Dollar Earmuffs!? That are even cute? What more could a college student want for the winter, something to keep them warm for the late nights out and something that is within their budget, (five dollars or less? J). While walking along the Strip we ran into multiple small shops that sold Pittsburgh memorabilia, whether it be the Penguins, Steelers, or Pirates, they had anything you could possibly want! You can tell walking up and down the Strip that it is a community based area, there aren’t large malls, or super stores surrounding the area, every vendor has a very neighborly vibe and there is a very friendly atmosphere. Walking up and down Penn Avenue you come across all different types of shops, the outside vendors have set up homemade clothing and artifacts that one can buy. For the most part everything that I picked up or purchased was very affordable, I even picked up a Sponge Bob finger puppet for my friend for only a dollar! This particular neighborhood has a story of its own; the Strip is one of the oldest neighborhoods that combines its industrial past, but also its trendy image that has welcomed it into the modern era. 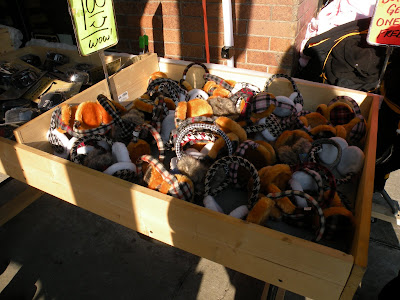 Posted by Strip District Adventures at 9:35 AM No comments: 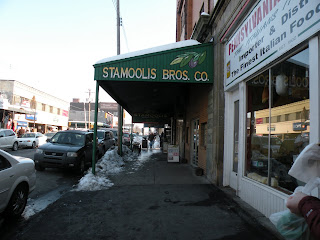 Walking along the Strip there are all sorts of goodies that can perk a meanderers attention. For our group, Saturday morning at 9 am (prime time for the farmers market) found us upon the doorstep of a place called Stamoolis Brothers. Outside of the store there were samples of chips and at least twelve different homemade breeds of salsa to try. Each was labeled with a description of spicy level and/or sweetness. While we were tempted to try them all personally, we limited ourselves to a few samples, (boy were they good!). Stamoolis Brothers Company was established in 1909, the five Stamoolis brothers came to the United States from Greece with a passion for food, ever since it has become a tradition in the Stamoolis family to bring the freshest Mediterranean style cuisine to the states. In 1929 the brothers came to Pittsburgh and joined their brother-in-law who had a similar store on Market Street; they eventually opened the store and warehouse at the Penn Avenue location. 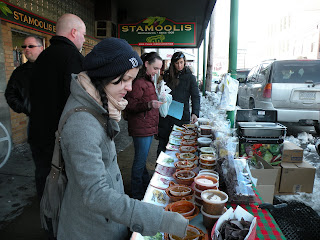 When you walk in the store today, it still has an old-fashion feel to it, inside there is exposed brick, antique wide-plank wood floor that has been marked up by the thousands of customers shoes, the aroma of spices, cheeses and meats fill the store inside and outside. Located at 2020 Penn Avenue, it’s a sure stop for anyone who goes down to the Strip.

Posted by Strip District Adventures at 8:44 AM No comments:

The RIGHT place to go is LEFTY's!

By Meg Dellas
The Strip District is quite commonly known for its nightclubs and bars, many establishments offer a lounge style DJ and techno based experience. However, one of the newest bars in the area provides a friendly neighborhood tavern atmosphere, right across the street from Déjà Vu. Lefty’s is the perfect place to stumble upon while walking the Strip. Whether you need a drink, want to catch the latest Pittsburgh sports score, or just need to rest your feet, the laid back atmosphere allows for many types of people to enjoy the same locale. This bar has quickly become known as a place dedicated to making everyone feel comfortable and welcome; it is affordable and has a friendly staff. It is no secret that many people that try Lefty’s do not leave disappointed, most become regulars! 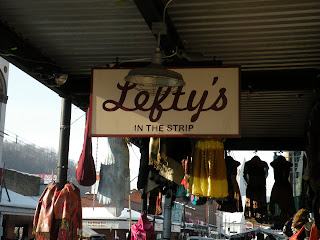 The Strip is best known for its refurbished collection of clubs where you can listen to live music and dance the night away. There are many popular bars in the Strip, it’s come to be known as the club district by night and the farmer’s market by day, what more could a group of young adults ask for? Good food, good drink, and plenty of experience and comradely to be had at every turn. You can get the freshest fruits, vegetables, pastries, within a minutes walk of the freshest beats, clubs and leather sofas in the greater Pittsburgh area, walking up and down the Strip district is a lesson in duality. The old brick buildings leave a feeling of history and nostalgia while the people, food and stores bring you into a modern landscape dedicated to providing a fresh outlook.

Posted by Strip District Adventures at 8:40 AM No comments:

Our Trip to Penn Mac!

by Anna Small
here are a few images of us getting the real Penn Mac experience:
showing off our purchases 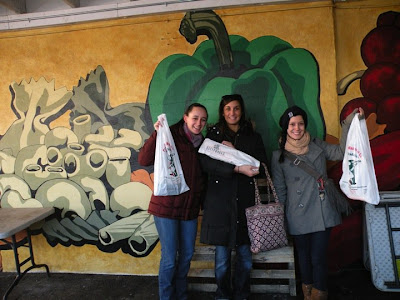 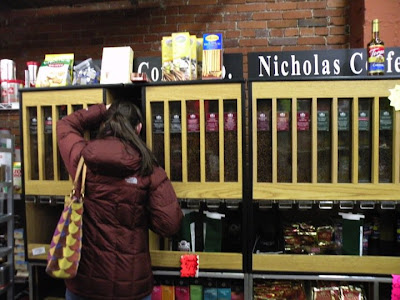 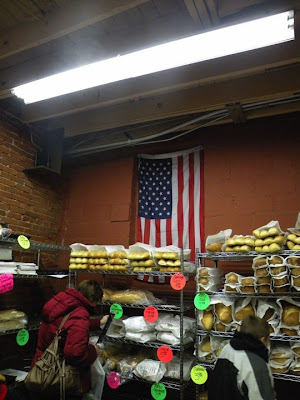 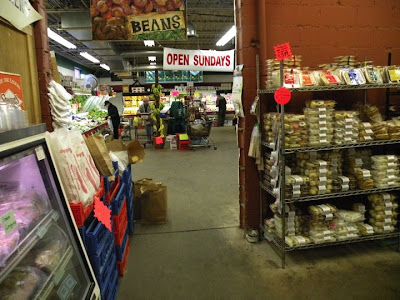 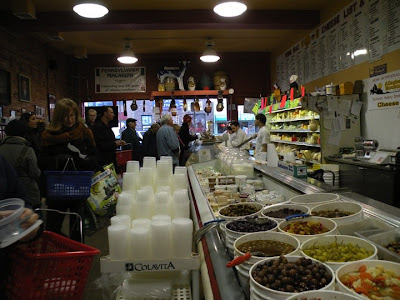 Posted by Strip District Adventures at 7:46 PM No comments: 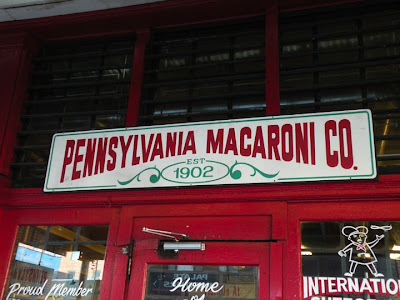 Opened in 1902 by the Sunseri brothers, Pennsylvania Macaroni Co. sells over 5,000 specialty products across the country. They boast the sale of upwards of 200,000 lbs of cheese per week!
They are known for their cheese but they have a very diverse inventory. They sell fresh bread, seasonings, pasta, specialty coffees as well as a variety of cooking products.
It is also another family operated company, run by the third generation of the Sunseri family.
Posted by Strip District Adventures at 7:32 PM No comments: 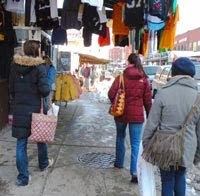